Why a GF Diet isn't Enough for some with Celiac Disease

Today's video covers a research study titled: Dietary Analysis in Symptomatic Patients with Coeliac Disease on a Gluten-Free Diet: the Role of Trace Amounts of Gluten and Non-Gluten Food Intolerances. It was completed in 1999 at the Royal Prince Alfred Hospital (RPAH) in Sydney, Australia by investigators Kim Faulkner-Hogg, W. Selby, and R. Loblay. Faulkner-Hogg was a dietician who worked for RPAH. RPAH is the world-wide leader for salicylate sensitivity and for treating patients with food intolerances. This paper addresses two situations: the affect that trace gluten has on people with celiac disease, and other food intolerances that tend to trouble people with celiac.

Abstract (from paper)
Background: Whereas many people with coeliac disease (CD) are asymptomatic when consuming a gluten-free diet (GFD), a proportion continues to experience symptoms. The reasons for this are unclear.

Methods: Thirty-nine adult members of The Coeliac Society of New South Wales, all of whom had persistent gastrointestinal symptoms despite adhering to a GFD, were evaluated. Dietary analysis indicated that 22 (56%) were consuming a GFD as defined by the WHO/FAO Codex Alimentarius (Codex-GFD), in which foods containing up to 0.3% of protein from gluten-containing grains can be labelled as 'gluten free'. The remaining 17 were following a no detectable gluten diet (NDG)-GFD, as defined by Food Standards Australia. All subjects were required to follow a NDG-GFD during the study. Those in whom symptoms persisted after changing from a Codex-GFD and those who entered the study already on a NDG-GFD began an elimination diet followed by open and double-blind challenges to identify specific non-gluten food or food chemical intolerances.

Results: Of 22 patients who switched to a NDG-GFD symptoms resolved in 5 (23%) and were reduced in 10 others (45%). Thirty-one subjects commenced the elimination diet. Symptomatic improvement was experienced in 24 (77%). Subsequent food or food chemical challenges resulted in a mean of five positive challenges per individual. Diarrhoea was the most commonly provoked symptom, followed by headache, nausea, and flatulence. Symptoms were especially provoked by amine, salicylate and soy.

Conclusion: The consumption of trace amounts of gluten, traditionally allowed in a Codex-GFD, may be responsible for the continuing symptoms seen in some patients with CD. Further investigation for non-gluten food intolerances should follow if symptoms persist after adherence to a NDG-GFD.

Faulkner-Hogg and team were noticing two situations. There was a group of people with celiac disease that were on a gluten-free diet, based on the Codex-GFD, which allowed trace amounts of gluten in a diet, and still able to call it gluten-free. These folks were still having stomach issues after six months of their gluten-free diet. The investigators wanted to see if they improved by removing trace gluten proteins, and 36% did improve with the new change.

Then there was another group who were on a strict no detectable gluten free diet (NDG-GFD) where no trace amounts were allowed. They were still having symptoms after being gluten free for 6 months. This group, and the not-improved 64% from the former Codex group, went on a strict elimination diet to see if other foods or food chemicals were bothering them. After the elimination diet, 29 out of 31 patients improved in their symptoms. 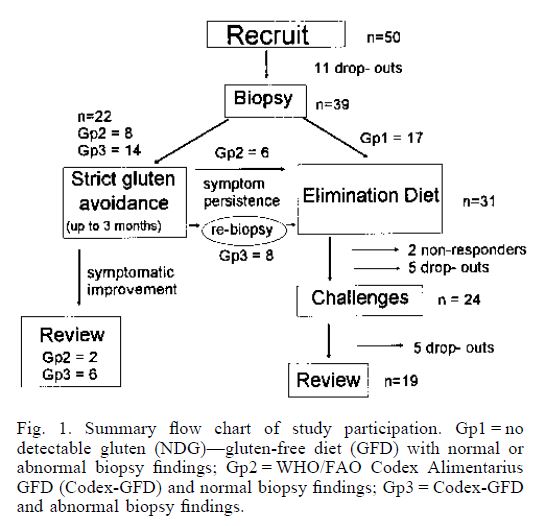 In order to figure out what was causing their symptoms, 19-24 subjects were asked to go through a challenge phase. There were three foods they could test on their own (knowingly) and that was with soy, millet, and milk. In all three cases, 41-50% of the group reacted to them. Then there was a double-blind test period with several natural food chemicals and synthetic chemicals, including a placebo, to take in an opaque capsule. Celiac patients reacted to many of the capsules. These chemicals are found in natural food (like vegetables) or added to foods for shelf life or color. Chemicals tested were: acetylsalicylic acid (salicylate), phenylethylamine (amine), tyramine (amine), monosodium glutamate (MSG), sodium propionate, sodium nitrate/nitrite, antioxidants (butylated hydroxy anisol (BHA) and butylated hydroxy toluene (BHT)),  preservatives (sodium benzoate, sorbate, and metabisulphite), colorings (tartrazine and erythrosine), and lactose. Placebo capsules contained potato starch and sucrose.

Here are a few tables from the paper. 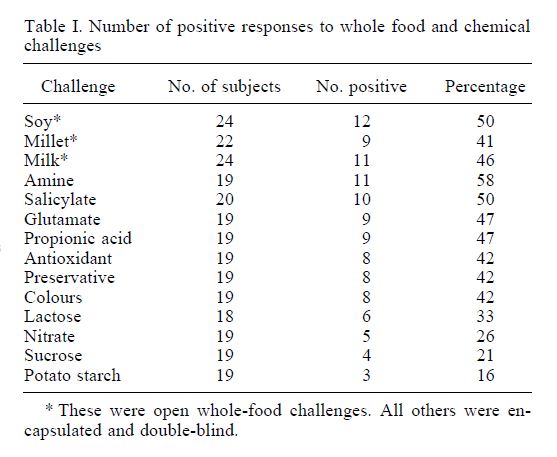 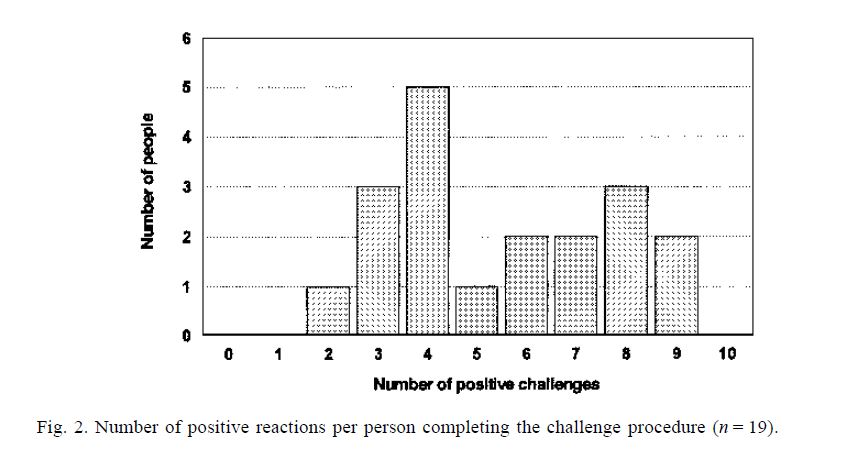 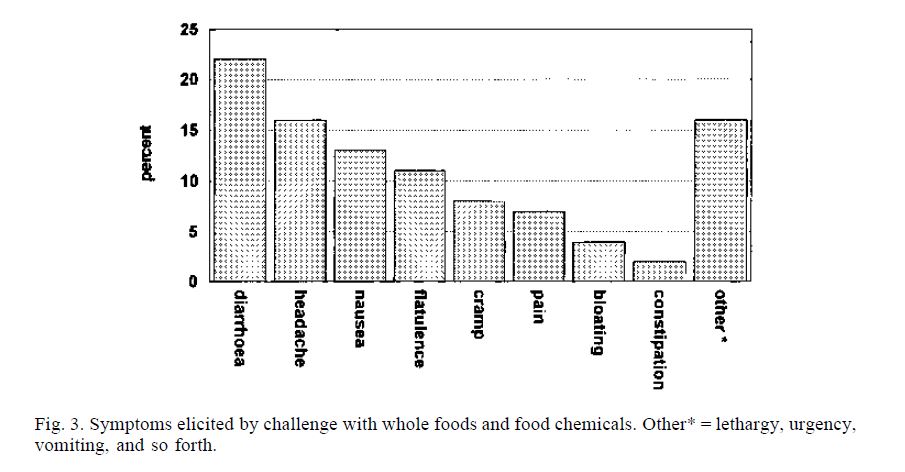 Watch the video for a full explanation of the study, including discussion and my thoughts.